On Sunday my mom and I were thrilled to meet Eddie Ross and his partner Jaithan Kochar when we signed up for one of their exciting shopping trips at the Scott Antique Market in Atlanta. Eddie, a former senior style editor at Martha Stewart Living and former contestant on Bravo’s Top Design, was incredibly gracious and helpful as he led us through the myriad of vendors at the market. Eddie and Jaithan may be New Yorkers, but you’d swear they were home-grown in the south because of their down-home friendliness. 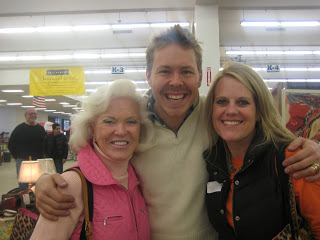 Unbeknownst to everyone, Scott’s didn’t open until 10:00 am on Sunday, so we were all there a little early. The security guard wouldn’t even let us in the front door at first. We were a tad chilly! Mom and I had arrived by taxi so we were at the mercy of everyone else to find warmth. Two sweet Atlantans invited us to sit in their car (each of us promised the other we were not axe murderers!). Come to find out later that we were with southern fiction author Mary Kay Andrews (of Hissy Fit and Savannah Blues fame) and her daughter, Katie! Such nice people and great timing.

A little later mom and I actually ended up sitting in Eddie and Jaithan’s car for a while. Talk about being in the right place at the right time!

Several other bloggers shopped as well, including The Newlywed Diaries, Better Together, Layers of Meaning and Southern Hospitality. Eddie was so nice to give me a little plug on his blog in his post about the Scott’s junket!

The great thing about Scott’s not opening earlier was that we all got to spend extra time with Eddie as he told us about his vast work experiences and gave us tips on everything from decorating to making good finds at a flea market. There was even someone there from Daily Candy (one of my daily reads!) chronicling the adventure! 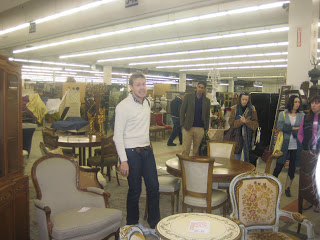 We learned so much from Eddie about tables, chairs, linens, china, sterling…the list goes on and on! I spotted a big green wine bottle and Eddie immediately knew that it would be perfect for a lamp and even told me how to go about doing it. 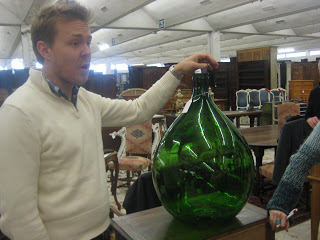 I actually ended up buying a clear wine bottle that’s pictured on the left in the photo below, since I don’t have much green in my house (although it would have made a great statement). Watch for my post later on the lamp-creating process! 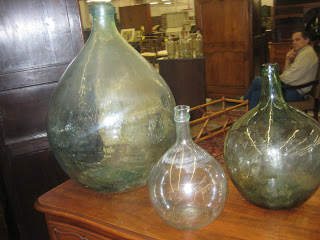 View this video to hear a little tip from Eddie on purchasing antique furniture.

Check out and subscribe to Eddie’s blog. He has fantastic ideas and is always an inspiration. And such a nice guy on top of everything! Expect great things from him in the future!