First Ed McMahon, then Farrah Fawcett, followed by Michael Jackson. But to have it topped off with the OxyClean guy (Billy Mays)? That’s just too much to take in one seven-day period.

The sad turn of events has made me nostalgic (even more so than usual), and my memories took me back to seeing the Jacksons on their Victorytour back in the ’80s. Was there any chance I could have saved my ticket stubs? Anyone who knows me would have bet the farm on my having kept them.

Most of my ticket stubs and other travel memorabilia went into a scrapbook that with a thick marker I aptly titled “Scrapbook”. I excitedly dug it out and flipped through the pages with anticipation. And there they were, in between tickets to Knotts Berry Farm and the local Putt-Putt…

My ticket to see the Jacksons (ignore, if possible, the misplaced apostrophe on the stub) at Texas Stadium in Dallas on July 14, 1984. My cousin Laura and I saw the concert from a box at the stadium, home to the Dallas Cowboys until this year. The former, classic Cowboys stadium. What a way to see a concert…windows open, all-you-can-eat/drink and Michael Jackson singing “Billy Jean” just a few yards away. 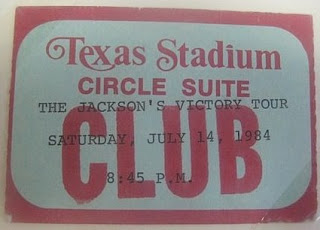 Less than one month later I saw the group a little closer to home at The University of Tennessee’s Neyland Stadium in Knoxville, although I must confess I don’t remember much about that show. It’s interesting that the show started at “dusk.” That’s a pretty broad definition, don’t you think?!? 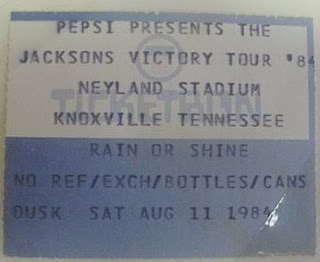 I’m also lucky enough to have an autographed photo of Michael Jackson, but sadly it is in a box deep in my garage at the moment. In 1986 my dad’s company owned a charter airplane and the King of Pop hired it for five months during his “Bad” tour. In the picture he is sitting in the cockpit. I was just chatting with the pilot the other day and he said what a nice guy Michael Jackson was. I can’t wait to hear more stories and find my photo (I’m not worried since I never throw anything away…). 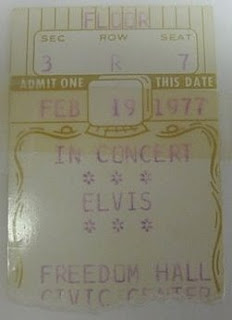 Just a few pages away in my “Scrapbook” was this little gem. My friends Angie & Vannessa and I saw Elvis in concert with our moms, just six months (almost to the day) before he died, in Johnson City, Tennessee.

I’m sure there are those who will profess that the King of Rock ‘n Roll and the King of Pop are now together, secretly hiding out as the world mourns their deaths.

I will just be happy if their ticket stubs can live on side by side in my “Scrapbook.”