Are there such things as vintage flowers? I’m sure of it. My mom’s mom’s mom (that would be my great-grandmother Ocie!) planted beautiful daffodils around her house decades ago, long before I was born. They’re still blooming there today, even though the house is now gone. She died in 1967, just one month before I was born, so I’d say that’s quite a green thumb. 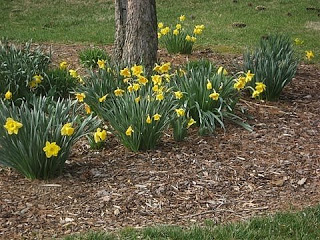 Even more amazing is the fact that some of the same daffodils were transplanted to my mom’s yard and are thriving (in fact, multiplying). They look so cheery in the photos I took this spring. My uncle David, who now owns my great-grandmother’s property, brought some to my mom years ago. He gave me a few as well and they look bright and colorful. I plan to have him plant even more when we move into our new house. 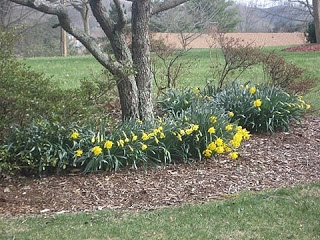 I’ve always wanted to go to the Nantucket Daffodil Festival, held every April. Apparently over three million daffodils bloom on the island in season. That’s roughly 300 daffodils per resident of the tiny island! The festival’s main event is the parade, during which 100 antique cars are bedecked with daffodils.

As much as I’d love to see those three gazillion daffodils, I think my great-grandmother’s vintage flowers are special enough for a festival of their own.