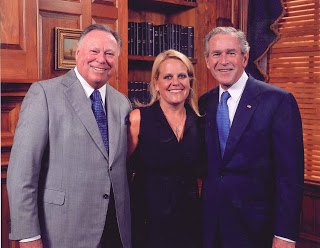 Recently my friend Vannessa and I had the rare opportunity, courtesy of my dad, to meet former President George W. Bush at The Olde Farm in Bristol, Virginia. The event was a fundraiser for two schools in Grundy, Virginia: The Appalachian School of Law and The Appalachian College of Pharmacy.

Securing a spot for the evening was, uh, a little pricey, but supporting two great schools and hob-knobbing with a former President was well worth it. No matter your politics, hearing George W speak only a few feet away was the opportunity of a lifetime. 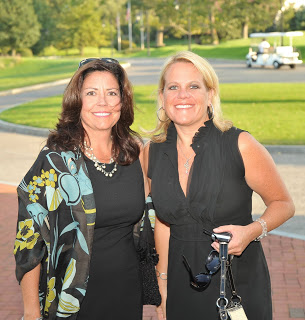 Did I mention the security clearance was no small feat? Social Security numbers, birthdates, deceased pets’ names and bra sizes all required. A wave of relief came over us when we got word we had been cleared (apparently the Secret Service had failed to look into our activities of the ’80s).

The evening began with cocktails and music in the clubhouse. Luckily I happened to be standing near the door when who should walk in but the President himself! I was star-struck! My heart skipped a beat a minute later when, in front of the crowd, my dad introduced me to him as his daughter…do you think he will remember me if there is a next time?!?

As part of the experience, we were all allowed “one click of the camera per person” with W. Somehow I managed to get two clicks while Secret Service was having a donut break. Up-close and personal, Mr. President was charming, handsome and looking slightly tanned (all the stresses of his former job clearly a distant memory). Vannessa and I almost drooled on his Hickey Freeman suit. He put his arms around us like we were old friends. Vannessa even managed to talk to him for a minute about their similarities, one of which is having reared twin girls. 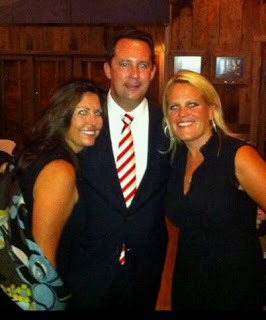 As if that weren’t enough, George W’s talk after our Kobe beef dinner was even better (and in case you are wondering, George drank O’Doul’s throughout the evening). Vannessa, my cousin David and I sat in awe for nearly two hours. He was down-to-earth, refreshing and real. He talked about Laura (referring to her as “baby”) and his girls, the Oval Office (Laura designed a rug for the office with a sun on it for his tenure…we taxpayers now own it), what he misses most (the White House pastry chef and being the most pampered person in the world), and his parents. During his first days as President, his dad was visiting him in the White House when a few men came out of his closet (literally; whether figuratively is for another blog post). George W asked Senior what that was all about and he replied that they were his valets. W said, “valets? We’re from Texas! We don’t need guys for that!” To which his dad replied, “trust me, son, you’ll get used to it!” And he did.

He gave us a “tour” of the Oval Office. Each President may pick a portrait of a former President to hang in the office during his tenure. After careful consideration, Bush chose his father “in his heart” and Abraham Lincoln to hang on the wall (W read over 15 biographies of Lincoln while he was in office). And rather than use a new desk for the Oval Office, W chose one that had been used by both FDR and JFK. Interestingly, the desk had originally been open in the front but FDR added a door so as to hide the fact that he was in a wheelchair (which most Americans of that time did not know, in an age before media). Most of us will remember seeing a picture of John John poking his head out that same door when his dad was President.

On a more somber note, he talked about his immediate reactions upon learning about the events of 9/11. He had none right away; like most of us, he sat in shocked silence.

The evening wrapped with W spending about an hour answering questions. My question to him was how had he shielded his daughters from the media and constant pressures. He answered by saying that that had always been a top priority for his family and he felt the media had been gracious in handling Jenna and Barbara. 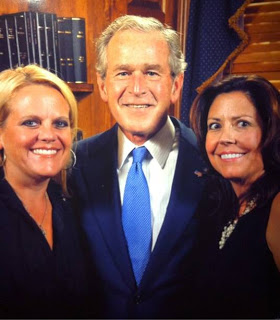 One final story to illustrate just how approachable the former President is. A friend of ours had played golf with him that day at The Olde Farm and had worried for a week or more over what attire would be appropriate in such company (even more interesting, the friend is a guy). Solid or striped shirt? Shorts or pants? Boxers or briefs? After much debate with his wife, he finally showed up for the game only to find W in cargo shorts and an untucked shirt (snipers on the hill notwithstanding). It just goes to show that President or not, we all just want to be comfy!