Exciting happenings for me last Thursday…I met Ken Farmer from PBS’ Antiques Roadshow! Not only that but I had a one-on-one chat with him and asked him to look at an interesting artifact from our corporate museum. 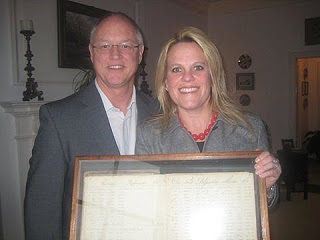 My hometown’s library, the Bristol Public Library, brought Mr. Farmer here as part of its 2009 Discovery Series and I was fortunate enough to be invited to a wine and cheese reception at a friend’s home prior to the public gathering. Later that evening, the library was hosting Mr. Farmer (who hails from Radford, Virginia, where my grandmother graduated from college…an anomaly for a woman born in 1914, but I digress…) and anyone could come and bring one item that they wanted him to look at and give a quick appraisal. Knowing that I couldn’t attend that event I decided to be rather bold and seize the moment during the wine and cheese. Of course, my husband tried to talk me out of taking anything into this private reception, and of course, I didn’t listen. 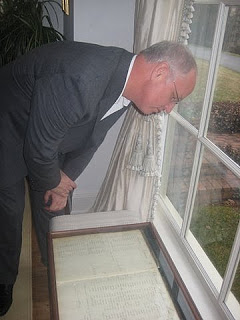 I did sort of hate to impose, but…Mr. Farmer (is it ok if I call you Ken?) was so cordial and approachable that it seemed perfectly fine. Plus the other guests were interested in what he had to say, and after all, it was a private “showing!”

The item I brought was one ledger of a set of several from the early 19th century. Our company inherited the ledgers from a company we had purchased back in the 1980s that was located in Orange, Virginia, about 25 miles from Charlottesville. 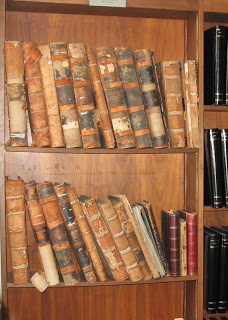 The set of ledgers itself is extraordinary, and details the accounts of customers who traded with the company almost 200 years ago. The covers of the ledgers practically turn to dust if you simply look at them; they are so fragile. One particular ledger itemizes the account of Thomas Jefferson from 1823. It shows various “merchandise” and “sundries” he purchased for the sum of $114.38 (the account on the following page, for the Porte Republic Store, shows purchases of $9092.79, an astronomical amount for the era). 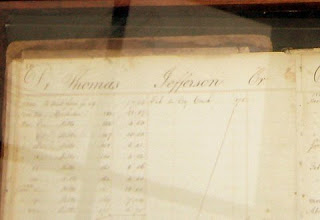 At first there was some question among our group as to whether Thomas Jefferson was still alive in 1823 (so we’re not history experts, or even novices, it appears!). Was this even the same Thomas Jefferson? It was the same time frame and geographic area. Through modern technology Mr. Farmer was able to surf the internet with his Blackberry and discover that Jefferson was in fact alive and well in 1823 and did not pass away until 1826. The ledger with President Jefferson’s account has quite a bit of value, according to the Antiques Roadshow guru, although the value would have skyrocketed with T.J.’s signature.

That’s one John Hancock we don’t have.