Another inauguration has come and gone and I’m paying for the snacks I ate while planted in front of the tv watching it. I don’t know about you, but when I weigh myself I don’t exactly want to be wearing my heaviest coat. I mean, those extra 2 pounds would just put me over the top! Wear this politically correct jacket and you really would have an excuse for tipping the scales. It weighs about 50 pounds. 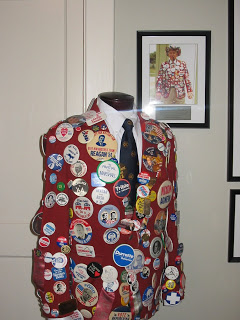 Sporting every Republican political campaign button from Nixon to Jack Kemp to Reagan, this jacket belonged to Robert “Yogi” Price and he wore it when he was a delegate at the Republican National Convention years ago. I’m not sure but I think he had to be helped up a time or two due to the sheer weight of the thing. 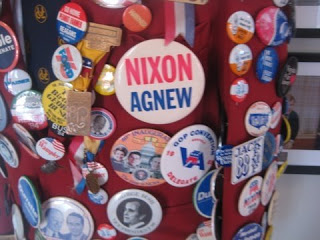 Covered in buttons both front and back, this jacket is a collector’s dream. It would take months if not years of searching to find even some of the buttons in antique stores or on ebay. We were lucky enough to have it donated to our corporate museum by Yogi’s wife. Yogi was a long-time friend and employee who passed away several years ago. At top you can see him in the photo in the background, wearing his prized jacket. He had a cowboy hat with buttons too (also in the photo), but sadly his wife couldn’t find it.

Who knows, maybe he’s wearing it with hopes of converting a Democrat or two up there.