We stumbled upon a great find for our corporate museum. On the college campus where our offices are located, there was a theatre (circa 1972), called the Humanities Center, that was used for community productions. Sadly, it had fallen into disrepair over the years and despite our asking around, even the city couldn’t take it over, due to high maintenance costs. Alas, we had to tear it down. So we set about salvaging every last item from the theatre that we possibly could. What a fun project (at least I thought so!)!

I have to say I was the only one of our “salvage group” who thought twice about saving the stage curtains. “Too musty,” “too dirty,” everyone said. Nonsense! They were beautiful velvet and simply could not be thrown away for such trivial reasons! There were two layers of curtains: red velvet and royal blue velvet. The red curtains were in much better shape; while I desperately wanted to save the blue, it just wasn’t possible. 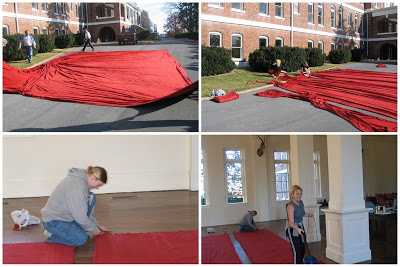 We took the curtains down on a sunny day and spread them out on one of the long driveways on campus. We had decided that they would serve as valances on some of our larger museum windows, and they needed to be cut to size. Astonishingly, the curtains had seams in the exact spot where we needed to trim, which made our job infinitely easier. They did not even need to be hemmed! We laid them out, sprinkled carpet cleaner and Febreze on them, and spent an entire Saturday vacuuming them. 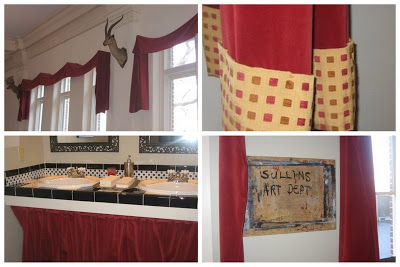 The uses for the curtains proved to be much more abundant than we had first predicted. Not only did they yield wonderful valances for all of the major museum rooms, they also produced skirts for underneath the bathroom sinks, a tree skirt for our annual Christmas tree and long curtains for other rooms. We even tacked fabric on the ends of the curtains for makeshift trim (the fabric was pinned on…see this post for another idea using crazy quilts).

Next time you’re not sure if you can salvage something, just remember it’s never too late for another curtain call.