I’ve been vacationing on Hilton Head Island in South Carolina for 48 years. After that long, a place feels more like a second home. All of those years have been spent in Sea Pines, in and around Harbour Town. You’d expect a lot of change over that period of time, and there has been around the rest of the island, but for the most part, Sea Pines and Harbour Town have remained the same. 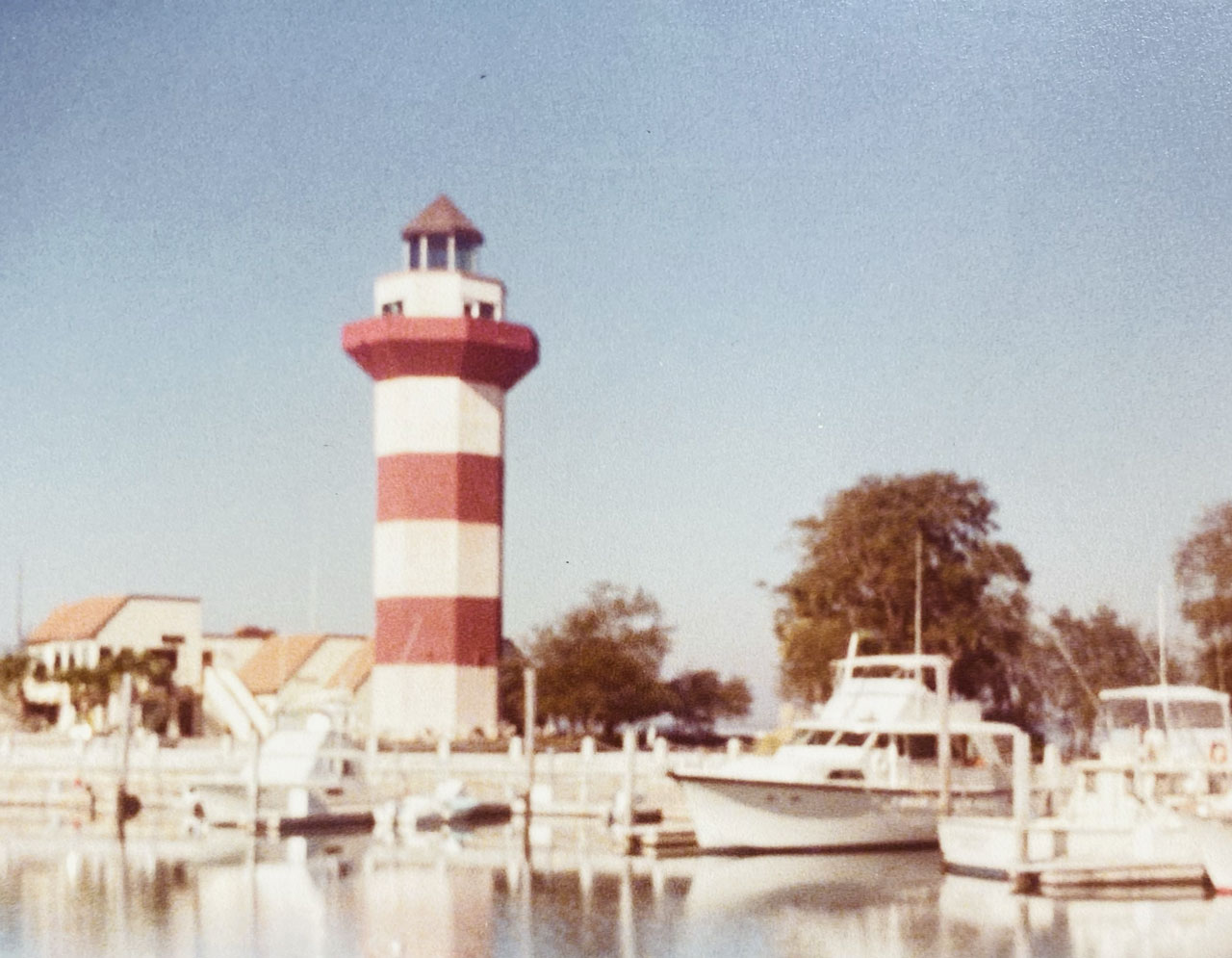 Harbour Town is anchored by a red-and-white-striped Lighthouse, which is the iconic landmark of Hilton Head (HH). Built over five decades ago when Charles Fraser first conceived of Sea Pines, it has stood tall over the Calibogue Sound ever since. The Harbour Town Lighthouse is one thing that has undergone significant changes, but you’d never know from looking at the outside–these changes are all on the inside.

As with so many things in life, the Lighthouse has become commercialized over the years. Back in the day when I was a little girl, the Lighthouse was a mysterious, must-climb beacon that represented freedom, summer, and celebration for me and many other vacationing youngsters.

Much like when you arrive at the beach after a long hiatus and run first thing to dip your toes in the ocean, the Lighthouse was the very first thing I would go see the minute we arrived. Our villa (that’s “condo” in HH speak) was close to Harbour Town and in those days my parents could easily trust me to ride my bike over there.

One hundred fourteen steps to the top on well-worn stairs that made a turn with every 10 steps or so greeted me. Little landings provided rest stops where your feet would slide on sand that had been tracked in. A certain beachy smell was trapped inside the silo-shaped structure. The gray walls, covered in etchings of hearts, names, and dates, made the interior seem dark and dank, in turn making an escape to the blue sky, sun, and wind at the top all the more exciting. When I first started going, I could just barely see the view over the railing, but with every passing year, I could enjoy more and more of the ships bobbing up and down in the yacht basin near the quaint row of shops. It was in that same row of shops that I had my first job at age 9, unpacking dollhouse furniture at Nell’s Harbour Shop for 25 cents an hour. I loved that job, even if it did last only a few hours over a couple of days. The cute store is still open today. The store’s founder and my early employer, Nelle Smith, wrote a fascinating book on the early years of Hilton Head and Sea Pines called Paradise: Memories of Hilton Head in the Early Days, which you can find here.

In those days the Lighthouse was open free of charge all day and into the night for whoever wanted to climb, as many times as your feet would carry you. We would climb multiple times on most days. Talk about getting your cardio in! If memory serves, it closed around 10 pm, probably so that parents could get their kiddos home for a rest. At the base was an ice cream stand, a gathering spot during my teen years. Around the sides of the Lighthouse were the Quarterdeck, which is currently being remodeled, and Cafe Europa. The Quarterdeck would turn into another hangout spot for my friends and I when we were in our 20s working on HH for the summer. 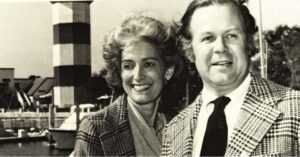 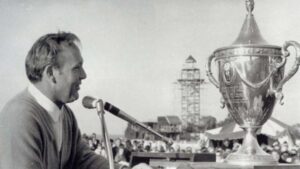 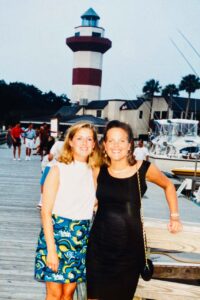 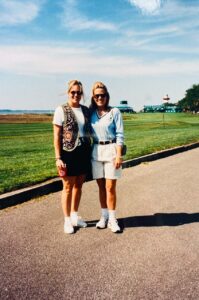 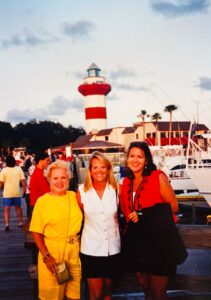 Charles Fraser, founder of Sea Pines and a friend of my dad’s, with his wife Mary. Arnold Palmer winning the 1st Heritage Classic in 1969. My best friend Shelly & I worked on HH one summer during college. My mom & I with my great friend Brooks. My cousin Laura & I have been here together since the beginning.

My dad and I would often walk to the Lighthouse, each time counting the steps it took to get there on the crunchy oyster shell path in Harbour Town, in addition to counting the steps to the top. My mom, being not so crazy about heights, would watch from one of the many red rocking chairs dotting the storefronts.

The Lighthouse is a favorite photo spot from various angles. After sunset, its reflection dances across the water, rippling with the gentle waves. No matter how many photos I’ve taken with the Lighthouse as a backdrop, I always need more. The view never ceases to take my breath away. 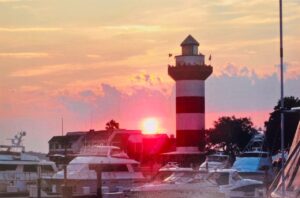 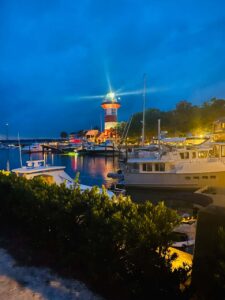 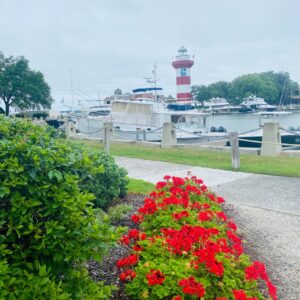 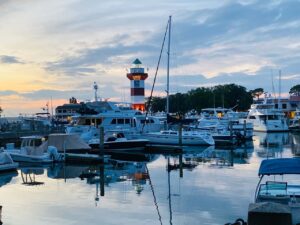 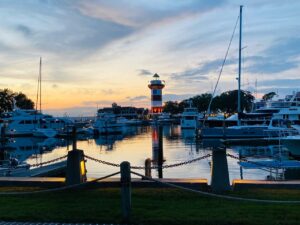 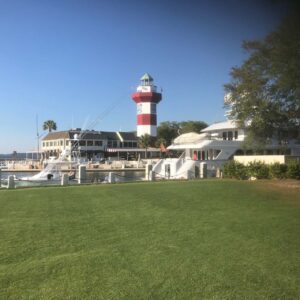 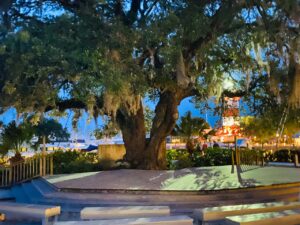 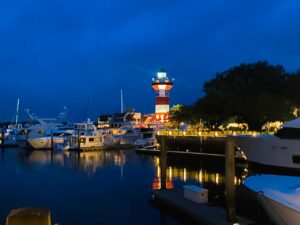 On any given evening, you can hear the strum of Gregg Russell’s guitar echoing around the Harbour. He has been playing there almost as long as I’ve been vacationing on HH. So long, in fact, that I have one of his albums, as in LP. Right now I can hear him singing his “Bubble Gum” song, see the Lighthouse blinking in the distance and kids riding bikes, in a scene where even a no-see-um’s flight would almost be welcome if it meant I could be in Harbour Town. Some sacrifices are well worth it.

The 18th hole on Harbour Town Golf Links is one of the most recognizable finishing holes in golf, mainly due to the Lighthouse standing sentinel as golfers complete a round they will not soon forget. 1969 was a memorable year, as it was the first year for both the Lighthouse and the Heritage Classic PGA Golf Tournament, played on Harbour Town Golf Links. The King, Arnold Palmer, won the tournament and in photos you can see scaffolding on the Lighthouse in the background as he accepted his trophy near 18 green.

Now there is a fee to enter the Lighthouse, and before the first step there is a gift shop containing lighthouse, Harbour Town and HH memorabilia. Start climbing and you’ll notice those gray walls are a little shinier, albeit still gray, than they were when I raced to the top in my whale pants and Docksiders. As you ascend, you’ll be immersed in the Lighthouse and Coast Guard Museums, filled with interesting historical relics. At the top is another gift shop that I never would have thought possible could fit up there. Defying the odds, more memorabilia can be purchased before or after you take in the spectacular 360 views.

These days my own kids ride their bikes to the Lighthouse. Sometimes to race up, other times to mill around the ice cream and t-shirt stores nearby or search for shells on the beach at low tide. When they were really little I worried they would somehow fall over the railing even though they couldn’t even reach it.

A few fun things happen in and around the Lighthouse now: weddings actually take place at the top, an oversized golf ball is dropped from the top in a countdown on New Year’s Eve, and the red stripes went Stewart plaid for the 50th Heritage tournament in 2019.

I miss the days when visiting the Lighthouse was easy and unlimited. Then again, my energy was unlimited too. This waterfront candy cane will always be a must-see for anyone visiting Hilton Head Island. The Lighthouse gives me comfort in knowing that some things will forever stay the same and I still want to see it first before anything else. The inside may change, but the memories and amazing view never will. 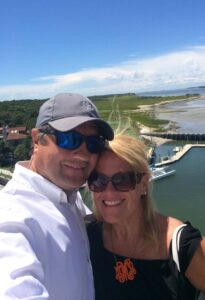 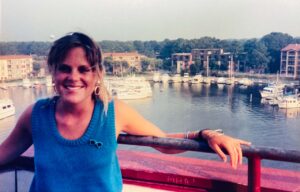 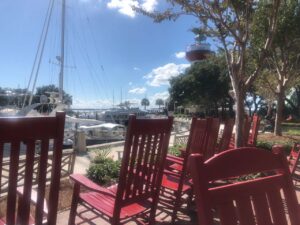 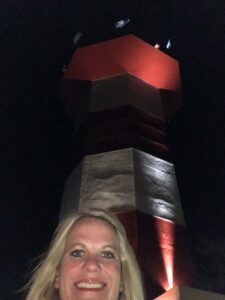 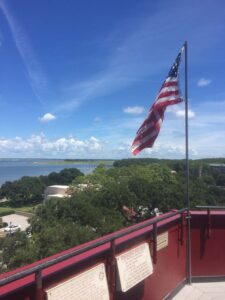 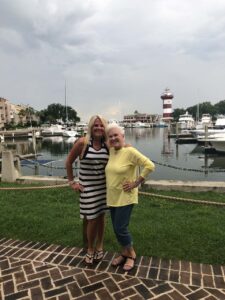 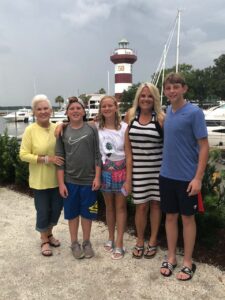 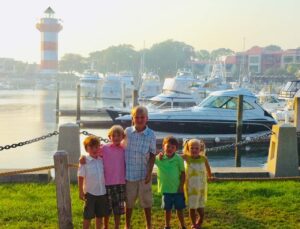 Now is a great time to visit!

Check it out on SouthernLiving.com